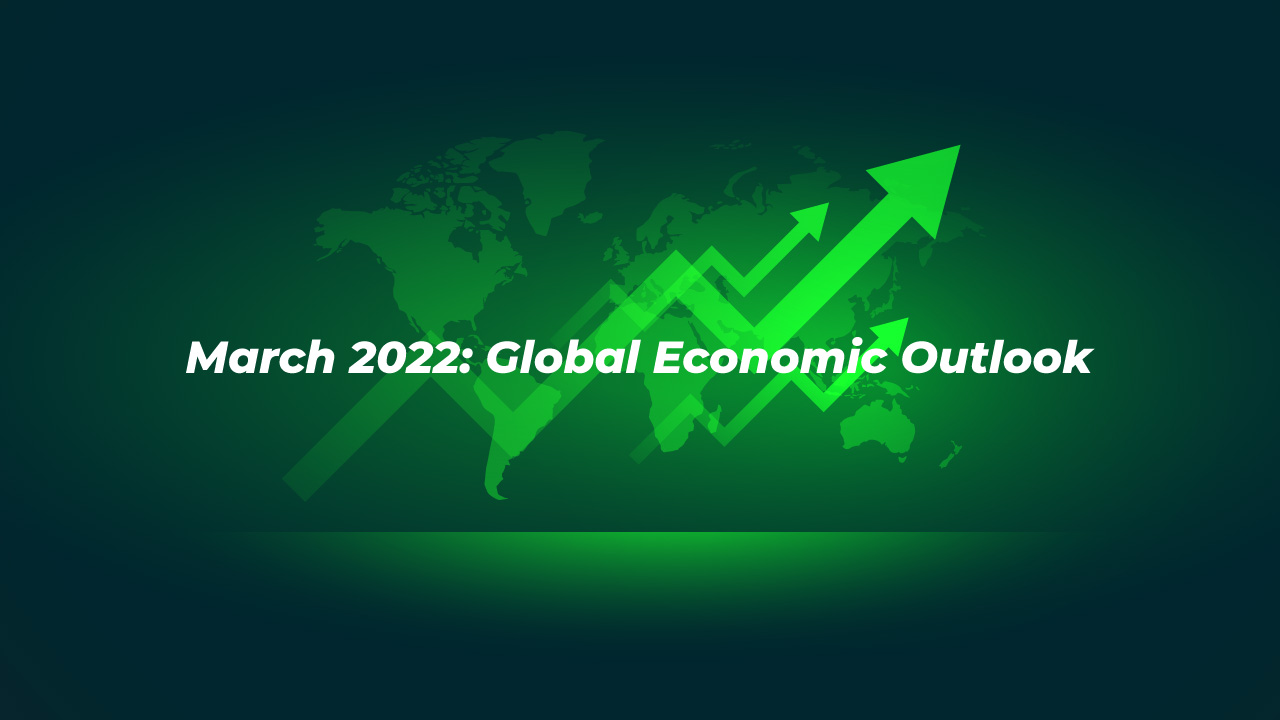 The post-Covid recovery is being hit by potentially huge global supply-chain constraints that will reduce growth and push up inflation. The Russia-Ukraine war and economic sanctions on Russia have put global energy supplies at risk. Russia supplies around 10% of the world’s energy, including 17% of its natural gas and 12% of its oil. The rise in oil and gas prices will add to industry costs and reduce consumers’ real incomes. Outright shortages and energy rationing are possible in Europe if there is an abrupt halt to Russian supply.

World GDP grew rapidly at 5.9% in 2021 but the outlook has darkened as inflation challenges have increased and Russia’s invasion of Ukraine and the resulting sanctions have disrupted global energy markets. The world growth is expected to slow down to 3.5% in 2022. These world GDP growth forecasts are above historical averages, reflecting ongoing post-pandemic reopening dynamics and strong near-term demand momentum in the US.

War-related uncertainty will also take a toll on European business investment, although there is likely to be some relief from higher defense spending and fiscal measures to protect households from higher energy bills.
US direct exposure to Russian energy is very limited, US wholesale gas prices have not increased as in Europe, and the economy was a small net oil exporter in 2021. However, underlying inflation pressures are proving to be much more intensive than expected and are now being exacerbated by the rise in global oil prices. This is imparting a shock to real incomes and prompting the Fed to raise interest rates much more quickly than expected.

The growth in emerging markets (EM) is expected excluding China to slow to just 2.5% in 2022. This partly reflects the anticipated 8% decline in Russian GDP as financial conditions tighten sharply and non-energy trading relationships are disrupted. These have been larger for net oil importers, including India, Turkey, and Poland, but tighter financial conditions and weaker global demand have generally outweighed any benefits to EM commodity exporters from the surge in commodity prices.

Brent crude oil price averages $100/bbl in 2022 reflecting fears of a disruption to Russian supply. European wholesale gas prices have averaged EUR140/MWh since the invasion, compared to around EUR70 in mid-February. But core inflation is also expected to be higher, particularly in the US and the UK, and food price inflation is set to rise following the rise in global wheat prices. CPI inflation is expected to average around 7% in the US in 2022. Inflation in Asia, by contrast, is expected to remain relatively low. The outlook for monetary policy has changed markedly.

Prior to Russia’s invasion of Ukraine, the global economic recovery was on track. India’s recovery in 2021 (calendar year) was also faster than expected at 8.1%. Activity in the US, UK, and eurozone showed only a relatively minor and short-lived impact from the surge in Omicron cases around the turn of the year. Consumer and services sector indicators recovered quickly in January and February and labor demand continued to improve with strong payrolls growth in the US and declining unemployment rates in Europe. UK monthly GDP jumped by 0.8% in January after falling by just 0.2% in December. Lead indicators of US business investment have remained buoyant and low inventories of finished goods pointed to an ongoing boost from re-stocking. China’s activity data for January and February was also stronger than expected, with fixed-asset investment, industrial production, and retail sales all picking up.

For some economies in eastern Europe, the deep recession about to unfold in Russia will be a significant shock to export demand but, by and large, exports to Russia represent a small share of total exports and GDP for most major economies. Rather, the largest impact by far stems from Russia’s huge share of global oil and gas production and trade. Russia accounts for 12% of global oil production, 11% of global oil exports, and nearly 17% of world gas output. It is by far the world’s largest gas exporter, accounting for a quarter of world exports. The increased risk of a significant portion of these energy supplies becoming unavailable is disrupting world energy markets.
The US, UK, and Canada have already decided to ban or phase out Russian oil imports and while Germany and the EU have so far resisted this move, there is growing political pressure to do so. Moreover, there have been reports of ‘self-sanctioning’ whereby potential buyers have been reluctant to transact for political or reputational reasons, consistent with the rising price discount of Russian oil barrels relative to global benchmarks.

There have also been threats from Russia of retaliatory halts to gas exports. Global oil and European gas prices have risen rapidly since the invasion, on the risk of supply disruptions. Prices have been highly volatile as energy markets reassess daily the probability of broader energy sanctions or retaliation and gauge the likelihood that OPEC members with spare production capacity might step in to offset a potential drop in Russian oil supplies. OPEC has stuck to its pre-war plans to taper early production cuts by 400,000 barrels a day each month. There is also uncertainty about the willingness of China, India, and other large economies that have not imposed sanctions on Russia to sharply increase their oil imports from there. Such moves could result in a redirection of Russian supplies eastward, reducing these countries’ demand for oil from elsewhere. But besides willingness issues – and the fear of ‘secondary’ sanctions – there are practical constraints to a rapid rebalancing of global energy trade flows. A high share of energy trade is pipeline-based and increasing shipping-based flows could run into sanctions constraints and insurance issues.

Russia is also a key supplier of a number of other commodities, such as wheat, fertilizers, and industrial metals including palladium (used in semiconductor manufacturing). Metals and agricultural commodity prices have also jumped since the invasion. This could bring renewed pressure on manufacturing supply chains that have been struggling to meet demand in the post-pandemic recovery. The rise in wheat prices – which also reflects Ukraine’s large share of global grain output – could cause global food price inflation to rise towards the peaks of 2008.

The war has brought the EU’s heavy reliance on Russian energy supplies into sharp relief. Natural gas imports from Russia account for 34% of the eurozone’s total gas imports, with the EU share at 38%. The share of EU oil imports from Russia is lower, at around a fifth of total oil imports, but oil accounts for a larger share of overall primary energy usage. Imports of Russian oil and gas combined account for around a quarter of the eurozone’s total primary energy usage; for Germany and Poland, they account for a third.

Central banks are not delaying plans to normalize monetary policy in response to the war in Ukraine and related sanctions on Russia. While the shock will have adverse effects on growth, its predominant impact will be to reduce aggregate supply and hence raise prices. Central bank policy frameworks give them the flexibility to look through ‘one-off’ increases in the price level due to supply shocks, but such a response is unlikely to be seen as appropriate when the starting point for actual and core inflation is far above the inflation target. In these circumstances, loosening the policy stance as inflation picks up would run the risk of inflation expectations ratcheting upwards.

The Fed has now become singularly focussed on using its tools to bring inflation down. Quantitative easing ended in March and balance sheet runoff is likely to commence in May with Fed assets shrinking by around USD2.5 trillion by the end-2024. The BOE has already raised interest rates three times since December 2021 and it is expected to make another two hikes later this year. The BOE balance sheet has already started to decline as gilt holdings mature and this process could be sped up by outright asset sales later this year once interest rates exceed 1%. Underlying inflation pressures are significantly lower in the eurozone with core inflation at 2.7% and wage growth below 1.6% YoY. Even so, the ECB’s first move after the invasion of Ukraine was to hasten the tapering of asset purchases and signal an earlier end to QE in 3Q22. ECB concerns about the risk of inflation staying high have risen.