Stocks Rakesh Jhunjhunwala is buying in this crash! One of the most celebrated Indian ace investor is Rakesh Jhunjhunwala. His investing acumen and humongous returns are such, that people fondly call him the Warren Buffet of India.

Born in a middle-class family to an Indian tax officer, he began trading in the stock market in 1985, while he was still in college. The BSE Sensex was around 150 points at the time, and he started investing with Rs 5,000.

Reportedly his investments of Rs. 5000 crores are today worth Rs. 39,000 crores, clearly he deserves the title of Indian Warren Buffet.

You know while we can all envy the returns that these ace investors make, we often overlook their investing strategies and key lessons behind their purchases.

So, lets first discuss the secret sauce behind the big bull’s marvelous returns and then we’ll discuss the stocks that he is buying amidst this volatile market.

Our ace investor is a fan of fundamentally strong stocks, In simple terms he believes in buying stocks of companies that have a sustainable moat, good earnings growth and healthy margins. Similar to Warren Buffet he is not a trader but an investor, who believes in buying and holding the stocks.

And whenever he sells a stock, it is primarily due the change in the fundamentals of the company.

"I sell for three reasons. If earnings have peaked or the PE (price to earnings ratio) has peaked or I feel I can get a better investment [opportunity elsewhere]. Otherwise, I don't sell generally,”.

In a recent interview, he said, One thing that can really help you become a good investors is learning. The more you learn, the better it would be.

In a volatile market, you can only hold a stock, if you have a strong conviction based on your research and knowledge.

Therefore, it is prudent that you keep learning about the markets.

Enough said about his strategy, let’s move on to his holdings. 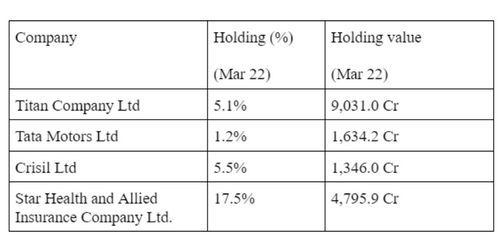 Some of his top holdings are Titan, Tata Motors, and Crisil, all of the companies are household names and are market leaders in their segment.

Recently Rakesh Jhunjhunwala has increased his stake in Canara Bank, which is the third largest nationalised bank in India.

Canara Bank is one of the most recent stocks added to Jhunjhunwala's already thriving portfolio. The investor fell in love with the bank in August of last year and has only increased his stake in the lender since then.

Canara Bank reported a strong performance in the December 2021 quarter, its profitability and interest income increased significantly due to a decrease in provisions.

His next pick is also in financial services sector, it is India’s third largest housing finance company Indiabulls.

Seems like the big bull is on a shopping spree amidst this volatile market.

Well, his investing style mimics his simple lifestyle. Invest in fundamentally great stocks, Sit tight and hold good stocks. Don’t speculate and invest based on your research and knowledge.