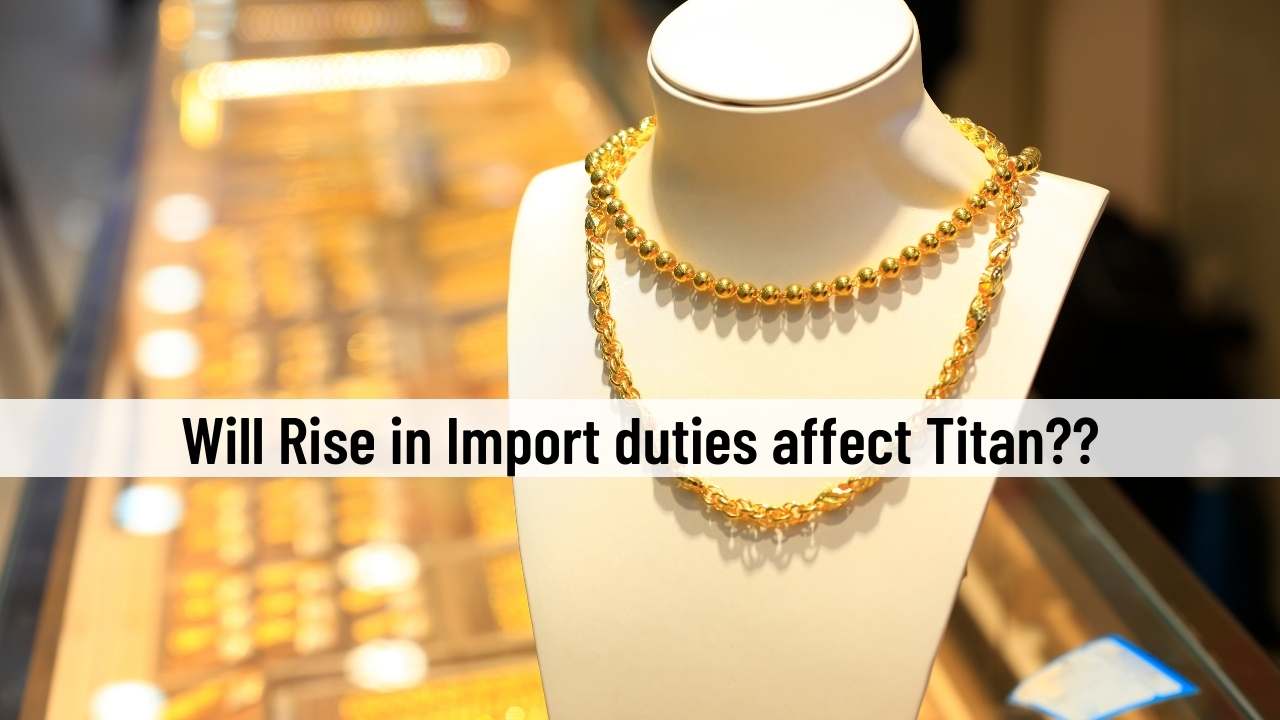 In order to reduce the growing trade deficit, which caused the rupee to drop to a record low of Rs. 79.12, the basic import duty on gold has been raised from 7.5 percent to 12.5 percent. The overall effective import duty on gold is 15.75 percent (base import duty, agriculture, and social welfare surcharge included). A 3 percent additional GST charge is applied. Notably, from January 2013 to August 2013, the government increased the total import duty (excluding GST) on bullion by a factor of five, from 2 to 10 percent. Prior to being raised to 12.5 percent in July 2019, the import duty was at 10 percent for over eight years.

In light of the substantial increase in gold prices since the previous tax increase, the total import charge on a gold bar was lowered to 10.75 percent in the last Union budget of February 21.

During FY13–15, Titan saw a moderate decline in jewellery sales together with a strong increase in gold prices. The "80:20" rule, which required that 20% of all imported gold be exported as jewellery, had strict requirements that had an additional negative impact on performance during the fiscal years 2013 to 2015. This was reversed in November 2014, though.

Additionally, even with a subsequent rise of 2.5% in July 2019, Titan had a brief slowdown in sales in the second and third quarters of FY20. Due to COVID-19, performance in 4QFY20 was severely hindered. Due to the increase in gold prices, Titan could experience some short-term inventory gains.

Due to weak sales in June and the first 20 days of April, Q1FY23 performance is expected to be modest. The Akshay Tritiya tithi helped jewellery sellers have a successful month in May. Tanishq also created a gold exchange programme during this time that had a softening effect. Sales are expected to increase by 18% CAGR over the next three years to Rs. 66.9 billion. Base quarters (1QFY21/FY22) were negatively impacted by the disruption caused by Covid-19. Margin stability of 12 percent is anticipated for the entire quarter.

- The increase in gold imports, which had topped 900 tonnes in CY10, was partly attributed to this by the authorities. As a result, between Jan-Aug 2013, a mere eight months, the government increased the import tax on bullion by five times, from 2 percent to 10 percent.

- It was part of a larger budget to raise revenue in FY20, since taxes on numerous imported goods, including electronics, increased along with personal income tax, where the top rate increased from 35 to 42.7 percent. Therefore, it was not intended to reduce gold demand, but rather to raise taxes more broadly.

- In light of the substantial increase in the price of gold since the previous tax increase, the total import charge on a gold bar was lowered to 10.75 percent in the most recent Union budget of February 21.

- The government raised the import tax on gold by 5% in July of this year as the trade gap stretched to a record level as a result of more imports than exports.