Why is it the best time to invest in Chemical companies? In 2015, one Tuesday morning, an alert came from the US Embassy's air pollution monitor in Beijing that said “the intensity of the tiny particles known as PM 2.5 was at 291 micrograms per cubic meter, a level described as "very unhealthy".

Levels of the poisonous particles in the suburbs were so high. the government banned all the even number of cars on road, and shut down the schools, and colleges that had no air filters on their premises.

Reportedly the pollution in China was killing 1.6 million people a year, or 4000 in a day!

This was the state of China, the cities were covered in a gray dome of pollution, and people wore face masks to protect themselves.

The government decided to take things seriously, they shut down all the pollution-emitting plants in the country, and put some stringent environmental norms in place. This move affected a lot of industries, especially the chemical industry.

The number of chemical companies in China’s largest chemical manufacturing province Jiangsu fell from 6000 to 2000.

China is the largest producer of Chemicals in the world, closing of manufacturing units paved the way for India, to shine in the global markets.

The global consumers signed long-term contracts with Indian players due to which they increased their capacities and witnessed 3x, and 4x growth in their revenues in subsequent years. If you are just like me, who did not pay attention to the chemistry class and wants to invest now in chemical companies, I get you, so I will try to break down a few things for you.

The chemical industry is divided into two broad categories: commodities and specialized. Although the demarcating lines between the two can sometimes become blurred, it is an accepted notion that commodity chemicals are high-volume bulk products with little differentiation. Meanwhile, specialty chemicals are low-volume, high-margin products sold to niche markets. This gives specialty chemicals a competitive advantage in terms of both customer loyalty and product differentiation. It should come as no surprise that most people have been focusing on specialty chemical companies because of their potential to generate higher revenues and margins than commodity chemical producers. They can also generate more consistent revenue streams than commodity businesses (which are highly cyclical).

A lot of times companies in the chemical industries integrate their businesses like a company producing a specialty chemical will produce the bulk ingredient as well if the cost of manufacturing it is lesser than the cost of acquiring it.

Chemical industries cater to a variety of consumer segments as well as industries like personal care ingredients, dyes and pigments, agrochemicals, polymer additives, water chemicals, textile chemicals, and application-driven segments are some of the subcategories of specialty chemicals. 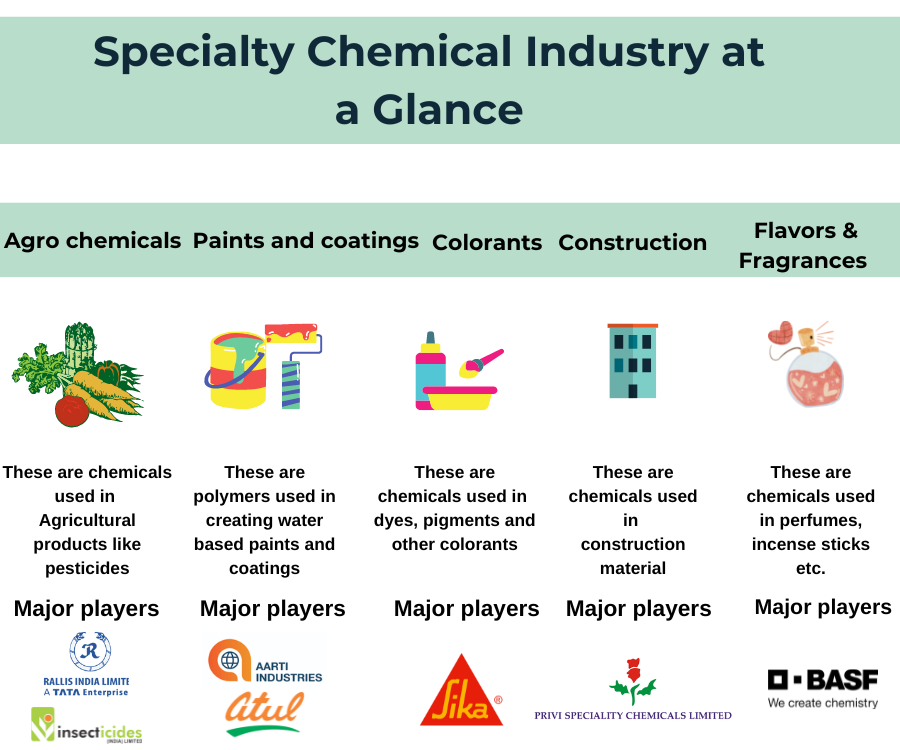 Amongst all the fastest growing segments are polymers, organic chemicals, detergent intermediaries, etc.

Within the chemical segment, the fastest growing segment in India is of speciality chemicals.

According to CRISIL  “Revenue growth is likely to improve sharply to 19-20% on-year this fiscal, compared with 9-10% in the pandemic-marred last fiscal, driven by a recovery in domestic demand, higher realisations owing to rising crude oil prices, and better exports. With western nations becoming more environment-focussed, production is increasingly getting outsourced to India, which has also emerged as an efficient and cost-effective alternative to China.

Why Speciality Chemical Industry is poised to grow in India?

Well, the current share of India in the global exports is 3%, while that of China is 25%. Their attempt to curb the pollution and their not so good relations with US would benefit India in the long run. Increase in domestic consumption: China isn’t the only reason, Indian chemical companies would see a better tomorrow, the rise in the consumption of end goods like Detergents, Shampoos would increase the domestic demand as well.

Increase in the R&D spend: Speciality chemicals are special because it takes years of R&D to make them, the investment in CAPEX by chemical companies was low because of competition from China, but now these companies have been increasing their spend towards R&D and therefore we can expect them to come up with more new formulations. India’s R&D spend in the chemicals has grown at a CAGR of 16% between 2009-2019.

Backward Integration: India is a net importer of chemicals, which means that we import more than we export.

India imported $56 billion and exported $41 billion worth of chemicals and petrochemicals in the year 2020.  Specialty chemicals, especially agrochemicals, dyes, and pigments account for over 50 percent of exports from India. Now if you look at the data closely, you will observe that we import more of bulk intermediaries, we process them and create more of speciality chemicals from them.

So, a ban on chinese chemical production isn’t necessarily a good thing for Indian companies, because it would raise the cost of raw material for them.

Now the demand for Speciality chemicals isn’t elastic Since very few companies can produce these chemicals the consumers would have to buy them at increased costs, therefore these companies saw a major jump in their sales, profits and cashflows.

Therefore, Some of the chemical companies in India are now investing heavily on backward integration, which means they will produce the intermediaries on their own and would not rely on imports.This would improve the margins and cashflows.

“A sizeable portion of this spend will be for backward integration, import substitution and to meet increased demand for exports,” it said in its March report. Companies have healthy cash flows to fund this CAPEX, therefore, reliance on the incremental debt will be low, it said.

Chemical companies have given marvelous returns to investors after one or two years of CAPEX, if you are an investor looking to ride on the Chemical boom, this may be the right time for you to add some chemical stocks to your portfolio.