Why did Binance dump WazirX? Until last weekend, I was of the thought that only Elon Musk and Kangana Ranaut could stir up the controversies on Twitter. But I was wrong, last weekend was super entertaining for Twitter users, we got to witness a cat and mouse fight on Twitter, between the CEOs of two large crypto exchanges in the world - Binance and WazirX.

Astonishingly, both of them shared an amicable relationship until the weekend.

In case you have missed all the drama, here is what exactly happened.

Changpeng Zhao, CEO of Binance on Friday in a series of tweets announced that they do not own Zanmai labs, the company that operates WazirX in India and only provides tech solutions to the Indian crypto exchange.

Nischal Shetty, the founder of WazirX did not really agree with him and engaged in a war of words with him.

The million-dollar question here is, Does Binance owns WazirX, if it does then why is it disowning the crypto exchange now? 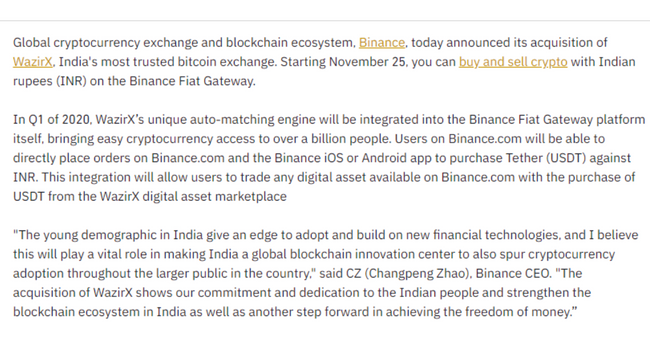 Okay, so if it did acquire WazirX, why is it denying it now?

Well, things have not been well for WazirX lately. It is being probed by the Enforcement Directorate in a Money Laundering case.

So, on Aug 3rd, ED raided the house of Sameer Mhatre, one of the directors of Zanmai Labs, to which he did not cooperate with the agency and post that the agency froze the bank accounts of WazirX which had balance worth Rs. 64 crores.

Now, you may ask why a crypto exchange is held for money laundering charges.

In July this year, a 24-year-old woman from the Guntur district in Andhra Pradesh, hanged herself because she was being harassed by the recovery agents of the instant loan app. When she applied for the loan through the app, she allowed the app to access her contact list and personal information. Since the loan app had access to her photos and contacts, the recovery agents threatened to send her compromising pictures to her relatives and other contacts.

Her only fault was when she was in dire need of money and she choose the instant loan app. She took her life because she could not repay the loan. She was one of the thousands of people that died of suicide because of the harassment of agents from these apps.

Data cited by the Telangana govt says criminal cases related to fraudulent loan apps increased by more than 1,300% to 900 in 2022, from 61 in 2021, with multiple suicides attributed to them as well.

RBI decided to act on these fraud apps and found out the details of 16 fintech companies involved in the fraud. During the investigation, they found that these companies were diverting their profits by investing in crypto assets and then diverting the money to foreign wallets through exchanges like WazirX.

When ED investigated WazirX, they found out the company did not comply with the KYC norms and did not follow the due diligence process with clients.

The investigation discovered that the majority of the transactions on the exchange were not even recorded on the blockchain. WazirX previously informed investigators that prior to July 2020, they did not even record the bank account details from which funds were coming into the exchange to purchase crypto assets.

Also, ED in its investigation mentions that the company had an obscure, web-like ownership structure, with agreements with a few companies like Crowdfire Inc. USA, Binance (Cayman Islands), and Zettai Pte Ltd Singapore.

Post the EDs investigation, Binance CEO Changpeng Zhao clarified that they don’t have any ownership in the company. The comments by Binance come as a surprise because Binance itself has been held by governments of multiple countries for money laundering cases.

For ex, Binance was warned by the Dutch central bank in August that it was not in compliance with laws aimed at preventing money laundering and terrorist financing. The US Internal Revenue Service is also looking into possible money laundering at Binance. A recent report by Reuters explains how the crypto giant was involved in money laundering of more than $2 billion dollars.

So, does that mean Binance owns WazirX? If not, what is really the relationship between them?

Well, it is difficult to establish that Binance bought the ownership stake in the company of just bought the IP rights from the company.

But according to the company filings by both entities, there is no mention of any transaction regarding the sale of any IP rights.

Although the company fillings do not show the sale of IP rights between the companies, the numbers have another story to tell!

The data indicates that the exorbitant rise in the revenue and cash flows of the company could have been because of the sale of the IP rights.

Well, the numbers and narratives have a different story to tell altogether! You tell us, what are your thoughts on the issue?