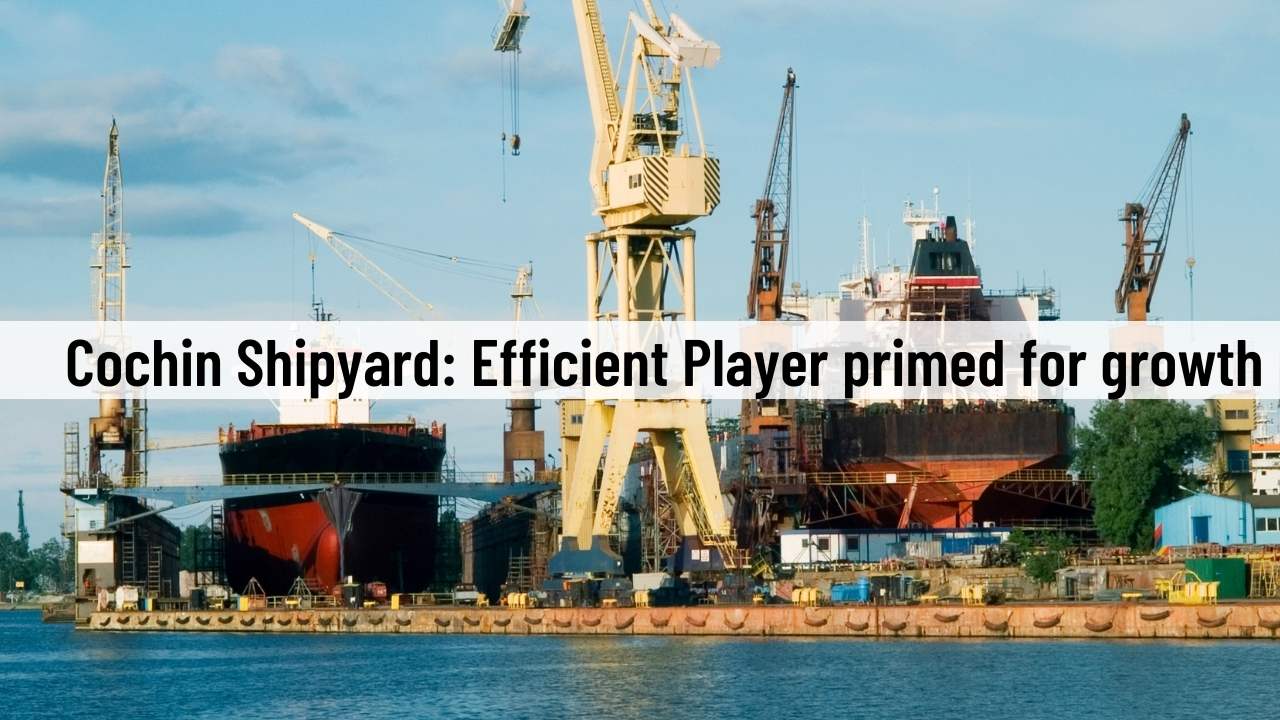 Cochin Shipyard is a 50‐year‐old PSU dealing in shipbuilding and ship repairs having the largest shipbuilding and maintenance facility in India with the capacity to build ships up to 110,000 DWT and repair ships up to 125,000 DWT. Cochin Shipyard developed India’s first indigenous aircraft carrier – INS Vikrant, which started sea trials in August’21 and is scheduled for delivery by July’22. Further, the company’s customer segments like the defense sector and other commercial sector provides stronger business growth considering GoI’s impetus towards these sectors through ‘indigenization’ and ‘Blue Revolution’.

Management of Cochin Shipyard guided for flattish growth in FY23E largely due to the nature of the order backlog, however, for FY24E it was confident of achieving 10‐12% topline growth.

On the shipbuilding side, it expects the Indigenous Aircraft Carrier to be delivered in July'22 to the Navy after which specific post‐commissioning work will be pending which is as per the terms of the contract

The large naval project of 8 ASW Corvette vessels worth Rs64bn is on track with 5 boats in various stages of construction. The first vessel is expected to be keel laid in July'22.

In terms of order inflows, the company has secured orders for medium size vessels from German short sea clients for the first time which has helped it to break into the niche segment and it expects further traction from the same. It has also received an order for a large dredger from Germany initially for one unit, but it is expected to go up to three and will be executed by FY24E

In Norway, it has received orders for two fully autonomous vessels. This won't significantly add to the top line, but it will help the company gain a foothold in the Norwegian market where there is a strong emphasis on green shipping projects FY23E revenue guidance is flattish while blended EBITDA margins should be in the region of 16‐17%

By FY24E, the company aims to achieve Rs.40 billion in revenue out of which Rs.12 billion will come from shipbuilding and an order book of Rs.200 billion

a) new drydock in Kochi which is being developed by L&T on a turnkey basis will come on stream by FY24E at the cost of Rs.18 billion

The company has a long‐term strategic plan named 'Cruise 2030' which has been designed in collaboration with Boston Consulting Group under which a new division has been created 'CSL Strategic & Advanced Solutions'. This division will provide end‐to‐end defense solutions to the Ministry of Defence and DRDO. The company intends to venture into green energy, batteries, e‐mobility, etc., and has already developed an electric vessel with a capacity of 500 tons and an 1800kW battery which is currently imported.