NAV In Mutual Funds - Things You Should Know

To have a clear idea about NAV, you should first know about Mutual Funds. A mutual fund is a professionally managed investment company, which pools money from many individual investors and invests them according to a particular investment objective stated in its prospectus.

If you check the performance of a mutual fund online, you will come across its Net Asset Value (NAV). But what exactly do you need to know about NAV? Let's look closely at the details! 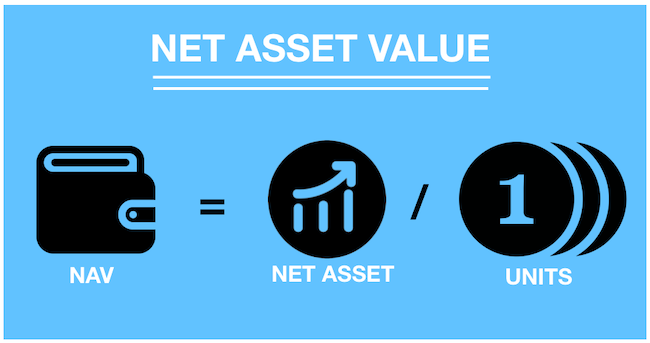 The NAV or Net Asset Value is the price per share that would bring the assets of the fund up to par with its liabilities.

As per SEBI regulations, NAV can have two components - Market Price and Value of Assets. The market price changes every second based on demand and supply, but the value of assets remains constant till it gets sold off completely (if ever). Hence this difference is called net, which means net value.

Note: If there is a dividend distribution, the previous NAV may change to affect valuations.

NAV is derived by dividing the total value of all the investments in a fund's portfolio by the number of outstanding units (shares). The NAV in mutual funds determines the purity of your investment.

NAV can be calculated using either "mark-to-market" (MTM) or "mark-to-model" (MTM). While MTM uses actual market prices, MTM uses information from past performances of the portfolio.

These fluctuations can occur because a mutual fund incurs operating costs or administrative fees throughout a trading day. For example, if a mutual fund incurs a 1% management fee each year, its net assets will decrease by 1% each day regardless of whether its prices have gone up or down.

How is NAV essential for investment in Mutual funds? 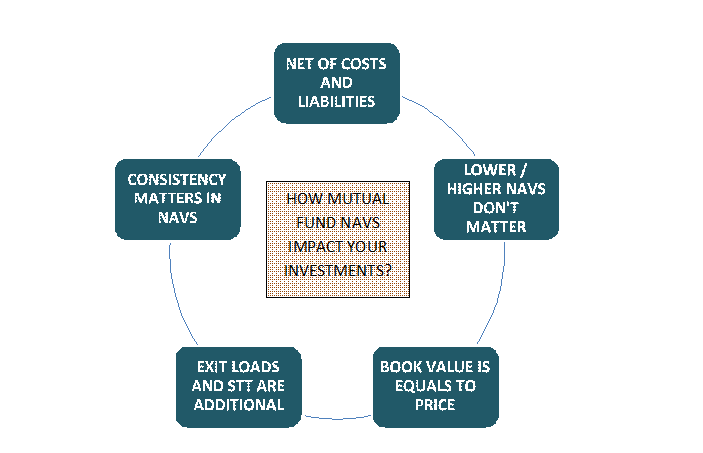 The NAV in mutual funds is calculated after accounting for all inflows and outflows. The value will be lower if there are more inflows than outflows and vice versa.

Difference between NAV and AUM

AUM stands for Assets Under Management. It is the total market value of assets invested by investors, whether directly or through mutual funds. Depending on the situation, the NAV might be different from the AUM.

The NAV can be higher or lower than the AUM, depending on whether investors buy or sell shares in the fund. If investors are buying shares, then the NAV rises while the AUM remains unchanged. This means that mutual funds can have a high NAV even if they don't have many investors. On other occasions, when investors sell shares, the NAV will fall while the AUM remains unchanged because new shares are being created to accommodate new investments coming into the fund.

The NAV of your mutual fund will be affected by the following factors. Let us understand each of these in detail:

This refers to the net change in the number of units held by investors. When a mutual fund has more inflows than outflows, its NAV increases. When there are more outflows than inflows, its NAV decreases. This is a common phenomenon and occurs due to several factors, such as:

i) Investors becoming aware of a particular mutual fund scheme and investing in it.

ii) The performance of the scheme being good, which attracts more investors into that scheme.

iii) A particular investor having a large amount of money to invest, which they want to invest in that particular scheme only.

iv) Some investors redeeming their units for some reason (e.g. due to an emergency).

The NAV of your mutual fund will be reduced if it declares a dividend. In such a case, an investor will have to pay more money to buy the same units from you.

The dividend declared is usually announced in advance and can affect the fund's price on the days leading up to the declaration date.

When a fund manager sells a stock or a bond that has gone up in value, he generates capital gains for himself and his investors. This leaves them with fewer stocks of this particular company, so they have to sell some other stocks to buy back the shares sold earlier.

They can't do it unless someone is willing to sell them those shares at that moment; therefore, when they are buying back shares from investors, they're also selling an equal number of new shares to someone who is buying into that fund for the first time (in simple terms: when you buy back old shares, new money comes in).

So, if you invest in a fund before it declares its capital gains, you will get paid for your old investments by the new investments coming in after trading resumes.

The NAV can also be impacted when new money comes into a mutual fund. This can happen when an existing investor decides to add more money into their existing investment or when a new investor comes in and places fresh cash into their account. In both cases, additional money will flow into your mutual fund, and its NAV will increase accordingly.

NAV is not static and does change over time. It changes every day since new assets are added while some assets are sold off, and some liabilities are paid off. Know your basics before you begin investing!

About 5paisa:- 5paisa is an online discount stock broker that is a member of NSE, BSE, MCX and MCX-SX. Since its inception in 2016, 5paisa has always promoted the idea of self-investment and has ensured that 100% operations are executed digitally with minimal to no human interventions.

Our all-in-one Demat account makes investment hassle-free for everyone, be it an individual newly venturing into the investment market or a pro investor. Headquartered in Mumbai, 5paisa.com - a subsidiary of IIFL Holdings Ltd (formerly India Infoline Limited), is the first Indian public listed fintech company.