Crude Oil prices slipped more than 8% during the week followed by the major correction on Wednesday after the U.S. inventories release. According to the data, the U.S. crude stockpiles unexpectedly rose by over 4 million barrels last week. Tensions between China-Taiwan and an interest rate hike by the Bank of England have also slammed the oil prices.

The OPEC countries & its allies also agreed to raise output by 1,00,000 barrels per day on Wednesday meeting, which is equal to about 0.1% of global oil demand.

Overall, Oil demand outlook has been sluggish by rising fears of an economic slump in the U.S. and Europe, a strict COVID-19 policy in China, and debt distress in the emerging market.

On the technical front, the WTI Crude oil prices corrected more than 10% over a week. The oil price has breached its prior support of $92.90 and moving towards the next support at around $85.40 levels. On the daily scale, the price has shifted below the lower Bollinger Band formation & 200-Days Exponential Moving Averages that suggests further downside in the counter. On the lower side, $85.40 may act as immediate support for the prices. Once it breaks the support can extend the fall towards $77 levels. However, on the upside, the price may find the resistance around $96.55 & $102 levels.

MCX Crude Oil price has been trading in Lower Highs – Lower Lows formation since mid of June month and also shifted below Ichimoku Cloud formation that indicates a bearish set-up for the counter. Moreover, the price has also moved below the Horizontal Line and traded near the psychological mark of Rs.7000 level. In additions, on a weekly timeframe, it has been forming like a Bearish Marubozu Candlestick pattern, suggests bearish momentum for the coming days.

So based on the above parameters, we are expecting bearish moves in Crude Oil August future. On the downside, it may find the support around Rs. 6450 / 6200. However, on the upside, Rs. 7650 & 8000 level would act as resistance for the counter. 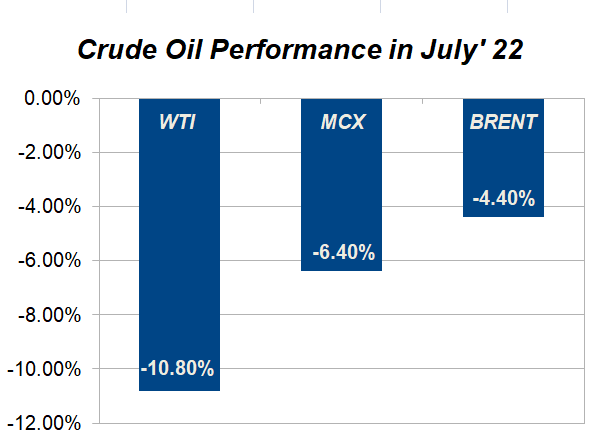 Global Crude Oil prices witnessed sharp decline during the month of July’22, due to sluggish demand by rising fears of an economic slump and debt distress in emerging market. Also, higher crude stockpiles in U.S. and expectation of rise in the OPEC output may dent the prices.