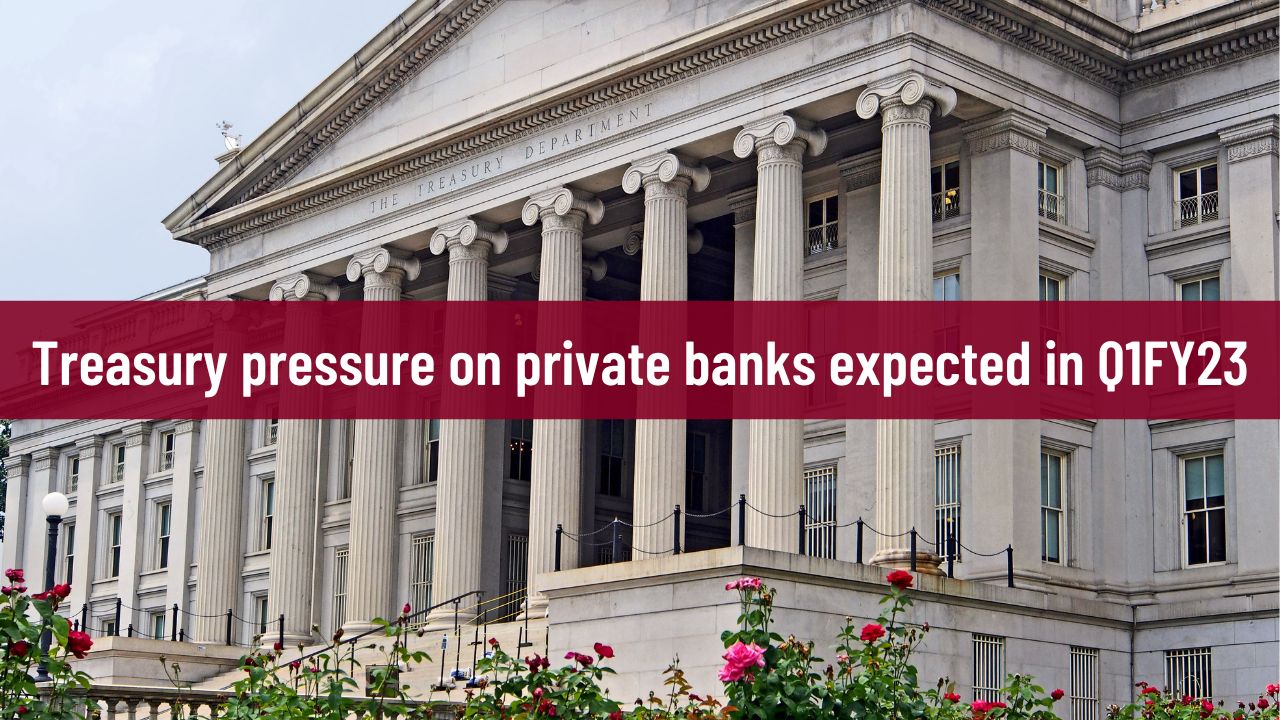 Some of the big banking results are already out with HDFC Bank, ICICI Bank and Kotak Bank declaring relatively attractive numbers on a yoy basis. However, the pressure is more likely to be visible on a sequential basis quarter over quarter. The reasons are not far to seek. Most banks have 3 major heads of revenues viz. retail banking, wholesale banking and treasury. It is the treasury income of the banks that has taken a hit on account of rising bond yields in the quarter, which has resulted in bond depreciation and treasury losses.

It is therefore not too surprising that most of the large banks that have announced the quarterly results for June 2022 have reported a sequential fall in net profits, although the yoy profits continue to be quite attractive and even enviable. In fact, out of the eleven private sector banks that have announced results till date the overall net profit at an aggregate level saw a 9% sequential fall over the March 2022 quarter. However, on a yoy basis, these profits were still higher on an average by 40% on lower credit costs.
Why is it that there is so much pressure on the qoq numbers of the banks and what has caused this high frequency pressure on these companies. For instance, two of the formidable private banks with traditionally low NPA levels have seen big losses on treasury income. However, there are also banks like ICICI Bank, Federal Bank and IndusInd Bank that have posted healthy treasury incomes in the quarter. Why this contrast in performance among private banks? Here is a quick look at the numbers.

For the June 2022 quarter, HDFC Bank reported higher treasury losses of Rs1,310 crore. These were largely in the nature of mark-to-market (MTM) losses on the bond portfolio. The other banks that saw a major write-off on the bond portfolio was Kotak Bank which saw a mark to market (MTM) hit of Rs857 crore on its trading book. However, for the private banks overall, if you look at operating profits, excluding the impact of the MTM losses, then most private sector banks did reported higher sequential operating profits in Q1FY23.

In a nutshell, the overall profit and margin performance of the private banks has been fairly impressive, if you exclude the impact of the treasury MTM write-offs. In addition, the asset quality is getting better and margins holding up well, but for the treasury losses. Even on the growth outlook, the private banks had a lot to cheer about. Growth outlook remains healthy, loan yields have been improving, and portfolios are re-pricing improved sector margins. The only challenge in the quarter has been the tepid deposit growth.

The news was quite encouraging on the asset quality front. For instance, the private banks saw an improvement in asset quality, which resulted in lower provisions. The biggest fall in provisions was reported by IndusInd Bank at 30% yoy fall in provisions. Even its gross NPAs fell from 2.88% to 2.35%. Bandhan Bank was the only bank to witness a spike in the gross NPA levels, which was up by 79 bps sequentially to 7.25%. That is more due to the concentration of the bank lending portfolio in the Eastern region.

This time around, nearly a quarter of the slippages came from the retail book, so banks are not overly worried as the recovery prospects are much better in the retail book as compared to the wholesale book. ICICI Bank saw fresh slippages of Rs5,825 crore in the June quarter but nearly Rs5,037 crore was from the retail book. The other major factor that has helped profits grow over the last one year is the lower credit costs. However, if yields were to spike further from current levels, then treasury losses could mount for most of the banks.