After reclaiming the 17000 mark, Nifty traded with a positive bias in the week gone by and crept higher to end the week around 17400 with gains of over a percent. However, a lot of uncertainty was seen in the last couple of trading sessions as the Nifty resisted around 17500 and saw stock specific profit booking.

The short term trend for the Nifty still remains positive as there’s no confirmation of reversal yet. However, the momentum readings on the daily chart are in an overbought zone and hence one should be vigilant on important market levels in the coming week. The index formed a ‘Hanging Man’ pattern on Nifty daily chart on the weekly expiry day and remained within the range on Friday. The mentioned pattern is a trend reversal pattern formed after a rally and hence a break of the low of the pattern will confirm a reversal of the trend. This support is placed at 17160 which will be the important support now and hence all existing long positions should now be trailed with a stoploss below this support. On the other hand, 17500 is the immediate resistance and if the index moves above that, it will result in a continuation of the uptrend and it can then move towards the 78.6 percent of the entire correction which is around 17870. Traders are advised to keep a close tab on the above mentioned levels and then trade in the direction of the breakout.

Nifty reaches overbought zone, but no confirmation on reversal yet 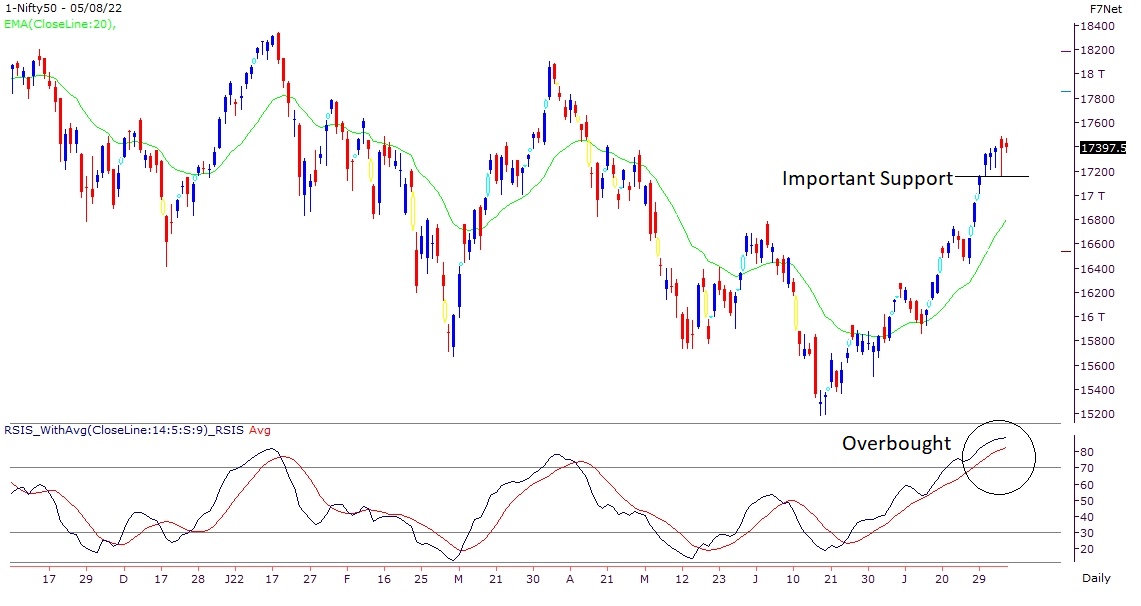 The midcap 100 index has reached its important trendline resistance and hence, some profit booking could be seen in the broader markets. The momentum could get concentrated to fewer stocks and sectors and hence, traders need to be very selective in stock picking for trading.