Can the flag pattern formation on Escorts overshadow the dull sales figures? 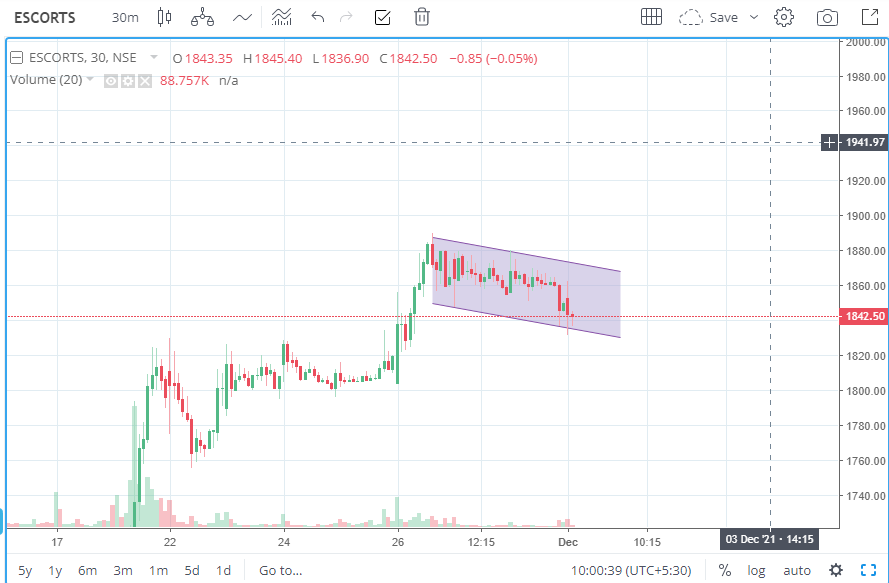 We have identified a flag pattern in Escorts on a 30-minute timeframe.

The flag pattern is one of the most used patterns in technical analysis, many chartists rely on it for their intraday and swing trades. It is among the most reliable continuation pattern and rarely produces a reversal. So let us understand what is actually a flag pattern.

The main points to remember of the flag pattern are:

We have identified a flag pattern in Escorts on a 30-minute timeframe.

We have observed a sharp move of 90 points on November 26 and has a steep upward slope. What we see next is the brief pause of the price in a tight range. An important point to note here is that the pole recorded heavy volumes and the flag has lighter volumes. The next step would be a breakout at the upper trendline. Heavier volume is a must at the breakout to confirm the trend.

November auto sales data is out, and Escorts have reported a 30% decline in November sales at 7,116 tractors vs 10,165 tractors sold in November 2020. The decline was entirely in the domestic market, with exports actually increasing by 121 units to 624. However, domestic market sales were down 33% to 6,492 units from 9,662 units in November of last year. However, the company said it was not overly concerned about the numbers.

This would impact the stock price and it would be interesting to see if the flag breaks out at the upper level. Breakout at the upper trendline would likely result in a sharp move of about 90 points.