The Nifty consolidated within a broad range of 15900 – 16400 during the week, but it recovered from the lows on the expiry day and continued the momentum on the last trading session to end above 16350 with gains of over half a percent. 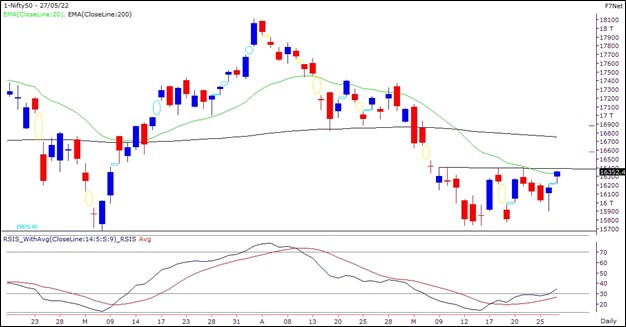 In last three weeks, the index has consolidated within a broad range and Nifty has ended around the higher end of the range. However, the relative outperformance from the Bank Nifty index was encouraging and it has already given a breakout from its resistance on the expiry day and has continued its outperformance. Now if we look at the sectoral indices, Nifty IT has shown signs of pullback move from its support while the Nifty Midcap 100 index too has reversed from its previous swing low supports.

In the recent corrective phase, Nifty has resisted around its ‘20 day-EMA’ on pullback moves and it has ended marginally above that average on Friday. Looking at the other sectoral indices, we expect the index to continue its pullback in the coming week as well and thus we could see some larger retracement of the previous correction.

The initial retracement resistance will be seen around 16550 which we expect to get tested soon. Above that, the 61.8% retracement which coincides with 200-DEMA is around 16750. On the flipside, 16200 followed by 15900 will now act as support on any declines. Traders are advised to trade with a positive bias for the coming week and look for stock specific approaches where we could see good opportunities.

The global markets too seem to be on a pullback path on the charts which would be the key trigger for our market. Also, our market has recently shown a strong inverse correlation to the US Dollar Index which has corrected from 105 to below 102 now. The US Dollar Index registered high on 13th May post which it has seen correction and the recent swing lows for our markets also coincides with the same time.

Hence, short term traders should keep a close tab on the US Dollar Index and in case we see a resumption of the uptrend in the same, then it would be initial signs to lighten up the longs again.