What we read from the 45th AGM of Reliance Industries 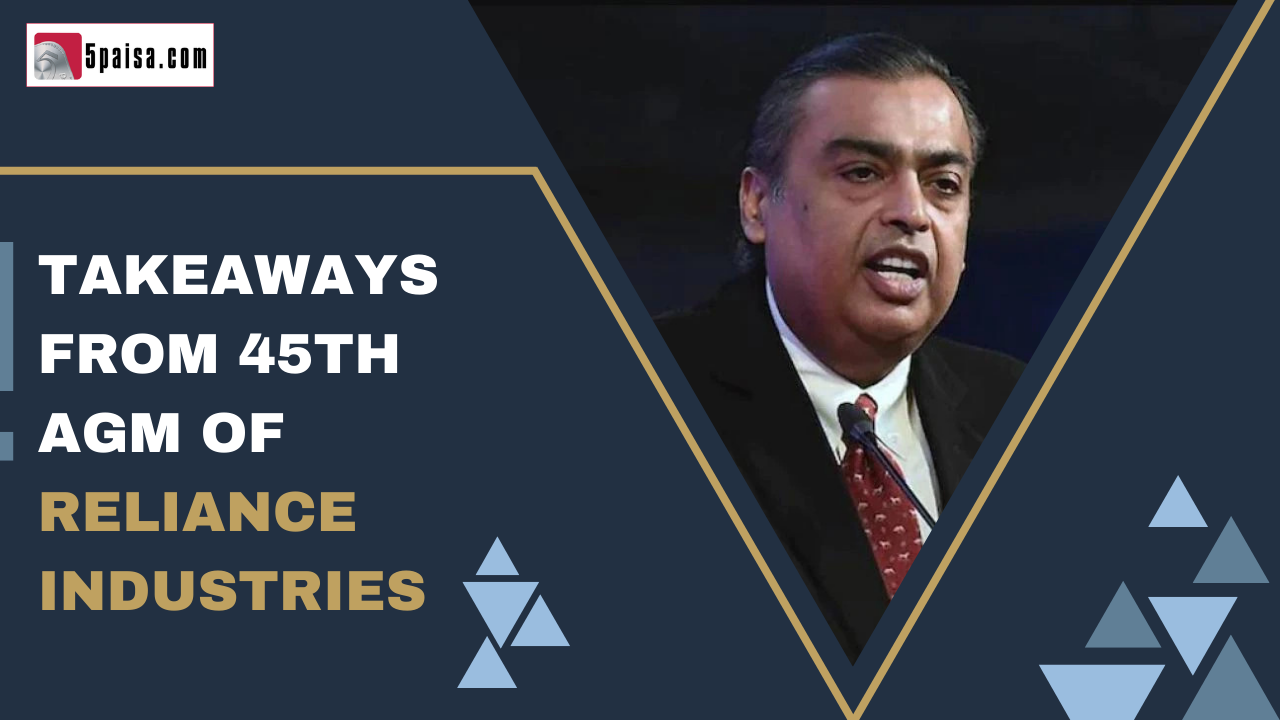 Even ahead of the 45th AGM of Reliance Industries conducted on 29th August 2022, the markets were rife with 3 expectations. They expected an announcement on the succession plan at the Reliance group, monetization of retail venture and the monetization of the Jio Digital venture. While the 45th AGM did lay out elaborate details on the succession plan at Reliance, it did not commit any time lines on the IPOs. However, the company did commit to announce such details at the 46th AGM next year.

What we read from the 45th AGM of Reliance Industries?

Here are some of the key takeaways from the 45th AGM of Reliance Industries.

a) Let us begin with the broad expectations from the AGM. On the IPO of Reliance Jio and of Reliance Retail, Mr. Mukesh Ambani was non-committal at the AGM. However, he did assure the shareholders that a more tangible announcement on this front would be made at the 46th AGM next year.

b) The company was a lot more explicit in terms of the succession plan. While the broad hints were there at the previous AGM itself, this AGM almost formalized the future leadership of the Reliance group. Akash Ambani would drive the Jio and the digital initiatives of the Reliance group while Isha Ambani would drive the retail initiatives. Due to the synergies, these two leaders will work in close cooperation with each other. Anant Ambani will take the reins of the new energy business, with focus on green energy and gradually transition the O2C business into a carbon neutral business.

c) Mr. Mukesh Ambani confirmed at the AGM that the Jio 5G rollout will happen by Diwali 2022. While the launch would be in Delhi, Mumbai, Kolkata and Chennai, it would be rapidly expanded to other towns and cities also. In fact, Mr. Ambani has committed at the AGM that the Jio rollout will be the fastest in the world completing the end-to-end rollout in just 18 months by December 2023. Jio 5G will connect over 10 crore homes with unique digital experiences and smart home solutions.

d) On the retail side of the business, the AGM underlined that the retail business had touched total turnover of Rs200,000 crore, making it one of the top 10 retailers in the whole of Asia. Ambani also highlighted that he expected retail to soon become the largest top line contributor to the Reliance group and it currently is already showing EBITDA of Rs12,000 crore.

e) The AGM also highlighted some of the rapid strides on the digital front with Reliance already emerging as the number one digital player by a margin. Reliance Jio has over 421 crore customers for mobile broadband using an average of 20 GB per month. Ambani also highlighted at the AGM that its current optic fibre network was more than 11 lakh kilometres long, enough to orbit the earth nearly 27 times over.

f) The chairman also highlighted some formidable numbers for the year. In FY22, RIL had become the first Indian company to cross $100 billion in revenues. Its annual EBITDA at Rs1.25 trillion was also an all-time record. The AGM also highlighted that Reliance had created a total of 2.32 lakh jobs in the year, not counting the indirect and ancillary opportunities created.

g) Reliance Retail Ventures will launch its FMCG business in this year with a focus on quality and affordable pricing. Simultaneously, the AGM has also announced a partnership between JioMart and Metaverse to enable the purchase of groceries via a simple WhatsApp chat. The cataloguing, product selection and payment will be built into the WhatsApp interface itself.

h) Reliance Industries has committed to invest a sum of Rs75,000 crore over the next five years to expand its existing petrochemical capacity. The petchem investments will be directed at setting up a PTA plant, expanding polyester capacity, tripling the capacity of the vinyl chain and a setting up a chemical unit in in the United Arab Emirates.

In a sense, the AGM marked did not disappoint the shareholders on the succession plan and the division of business is quite explicit now. Of course, Mukesh Ambani will continue to still be the driver of the business. Of course, investors would be more keen on the monetization of Jio and Reliance Retail, where an announcement is expected next year.