Adani Transmission acquires Essar Power to increase its capacity, is it the right time to invest in the transmission giant? Adani Transmission has been on a shopping spree in the last few years as it has made some major acquisitions like Reliance Infra, MP power etc . Most recent addition to its kitty, is Essar Power Ltd, it acquired the company for its 673 Circuit Kilometers (CKM) operational inter-state transmission project.

The target asset is an operational 400 kV inter-state transmission line linking Mahan in Madhya Pradesh to Sipat pooling substation in Chhattisgarh. The project operates under the CERC regulated return framework and was commissioned in September 2018.

With this acquisition, the cumulative network of ATL will reach 19,468 ckt kms, out of which 14,952 ckt kms is operating and rest under commission.

Through these acquisitions, Adani plans to spread its transmission network across India, so is it the right time for you to buy this stock?

Before moving to the business, let's learn a bit about the transmission and distribution business.

So, there are broadly three parties involved in the power sector.

Power generators:  Power is generated in power plants through renewable and non-renewable Sources. Currently, most of the power consumed in India is produced through Coal, as renewable energy sources are not as reliable and consistent suppliers of power as thermal energy.

Distribution and billing of power are done by the distribution companies.

Adani is engaged in power transmission and distribution, the company is the largest player with 35% market share in the private transmission space.

Now power transmission by its nature is a business which requires a huge upfront cost to acquire or build the projects, but after that there's steady revenue and cash flows. Since most of the projects have long term transmission service agreements, lasting upto 30 years, revenue streams of these companies are steady and predictable.

Adani Transmission is the leading private player in the industry with the cumulative network 19,468 ckt kms, out of which 14,952 ckt kms is operational and 4,516 ckt kms is under various stages of execution. The company is well in place to achieve its target of 20000 ckt kms.

The company has around 18 operational projects with an operational track record of 2-3 years and average availability being maintained at above 99% for all the assets. These projects have long-term transmission service agreements for more than 30 years with an availability-based revenue stream. In addition, the company has a Mumbai HVDC project, which is expected to get commissioned by FY25.

Due to lack in power transmission capabilities, there is insufficient power which results in power cuts, therefore the government is focused more on improving the transmission sector in India. Even after the pandemic, when operations of most industries were on halt and electricity consumption was low, Adani transmission had grown its revenue at a rate much higher than its peers. 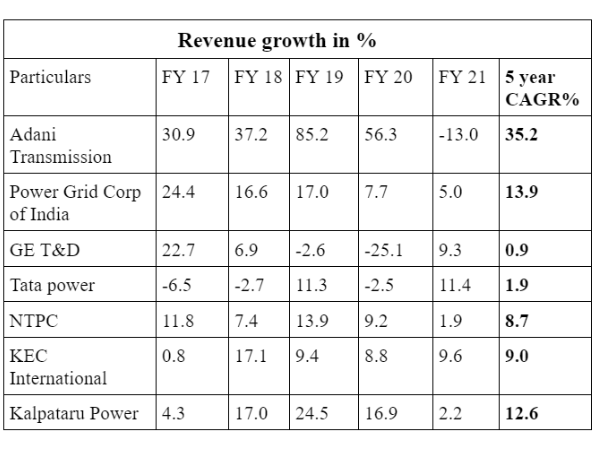 The company has been maintaining a healthy growth in revenue as well as high margins, since most costs in the transmission sector are fixed, companies enjoy the benefit of operating leverage. Adani transmission as well has an operating of more than 90%.

In the past 5 years, while the revenues of all leading power transmission and distribution companies have grown at a single-digit CAGR, ATL has soared like a phoenix with its revenues growing at 35.2% CAGR

It is primarily because of its favorable tariff structure.

Regulated transmission tariff : The revenue recognition is based on the annual revision of operations & maintenance (O&M) cost and interest expense. It provides flexibility against interest rate volatility and O&M variability. However, it carries the risk of uncertain future cash flows.

ATL operates only 2 projects under the RTM tariff and rest under the fixed transmission tariff, since the tariff is fixed and is collected through a central pool mechanism, under which the default chances are negligible. ATL’s operations with the fixed tariff system results in predictable cash flows and low counterparty risks.

Some of the major risks associated with the company are High debt, which has been mounting.

The debt has increased by 100% in the last 5 years, which is a negative sign for the company.

Further, with the Adani group there are inherent risks associated with them, like high FPI holding by a handful of companies, and low analyst coverage.

While Adani transmission is well placed in a growing industry, the company comes with its own set of risks.