Coal India to focus on 700mt production in FY23E 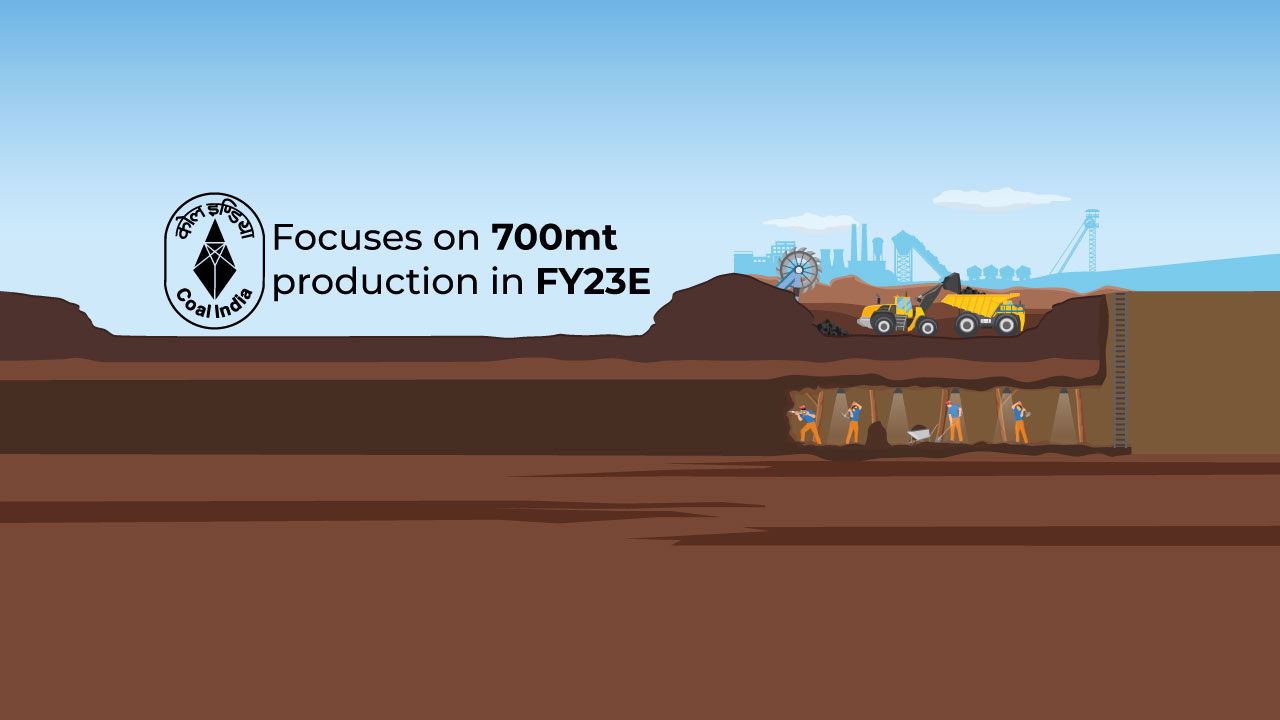 Coal India has set a production and offtake target of 700 million tonnes in 2022-23 after achieving record production in 2021-22.

Coal production during March 2022 was pegged at 80.3 million tonnes, down marginally by 1.1 percent compared with the same period the previous year.

A contributor to the production boost ahead is the clearance of 16 coal mining projects, of which 7 are greenfield, and 9 are expansion projects. Combined these have a total capacity of nearly 100 million tonnes per annum. Coal India has already issued work orders for 5 projects of the identified 15 MDO (mine developer and operator) projects during 2021-22.

At 126BU, India's electricity demand grew 6% YoY in March-22. With the easing of restrictions and rising temperature, the demand growth is higher-as compared to recent months. With generation lagging demand, spot power tariffs have touched the upper limits of Rs.20/unit. The average power cost in the spot power market in FY22 has been Rs.4.39/unit-as against a historical trend below Rs.3/unit.

Coal India's notified price for the highest grade of coal G1 coal is around Rs.8,500/mt and G8 around Rs.2,600/mt. The coal from mines like Nigahi and Khadia got sold at Rs.13,400/t for mid-level grades of G7 and G8. Moreover, the minimum price discovered from the e-auction was Rs.5,900/t, for rejected coal from the Bina mine. The premium over the reserve price is high due to the higher landed cost of international coal, which was over Rs.15,000/t. Coal India targets 15% of overall off-take through the e-auction window.

India requires 960-970 million tonnes of coal, of which 720 million tonnes is produced domestically and the balance gets imported. In previous years, the total imports were 250mnt. In FY22, India is estimated to have imported 190-200 million tonnes, due to higher international coal prices. The lowest possible imported coal is will be 100 million tonnes, beyond which it cannot be substituted with domestic coal. This is because of the input specification of coking coal and high-grade thermal coal.

The pan-India average coal stock at thermal power stations remains at 9 days, as of March 31, 2022, as against 9 days as of November 30, 2021. The lowest level of 4 days was on September 30, 2021, as against the normative requirement level of 24 days. With sweltering summer ahead, the pressure on coal demand could be higher.

Coal India estimates a Capex of Rs.800 billion over the next 6-7 years while planning to achieve its 1Btpa target.