The US CPI data released on Wednesday which soared 9.1% year-on-year; climbed to a new four-decade high. This raised expectations that the Fed could raise rates by 100 bps rather than 75 bps as expected.

Goldman Sachs Group, which is often bullish on commodities, has cut its near-term price forecasts for copper in anticipation of a sharp slump in industrial demand and slow global economic growth as Europe’s energy crisis deepens.
China stainless steel production drifted lower further in July, followed by the sharp decline in June month. On Tuesday, the CEO Matthew Chamberlain said that LME hopes to restart Nickel futures trading in Asian hours soon, once the liquidity rises to levels seen before the suspension mark. LME Aluminium prices tumbled to their lowest in more than a year on Thursday on expectations of rising supply from top producer China where smelters have been ramping up output.

On the data front, US Manufacturing PMI reached a 4-month low of 52.5, Building Permit numbers fell down to a 9-months low and sluggishness in the Chinese PMI data are indicating risk-off sentiments.


LME Copper witnessed a significant decline in the prices from $9700 to $7300 in last two months and traded to their lowest in more than one year. On the monthly chart, the price has been trading near to its major support at around $7250, below it the correction may continue till $7000 & $6600 in the coming months.


On the MCX front, the Copper prices plunged more than 8% on a weekly basis and moved below the major support level of 610 or 50% Retracement Levels of its prior rally. Moreover, the price has also traded below 200-weeks Exponential Moving Averages and Ichimoku Cloud formation that suggests more bearishness in the counter for the coming week. However, a momentum indicator RSI (14) and William’s %R are hovering near oversold territory, which may lead some pullback from the immediate levels, but overall market sentiments & ongoing news flow remains bearish, which may cap the pullback rally and keep the prices under pressure. 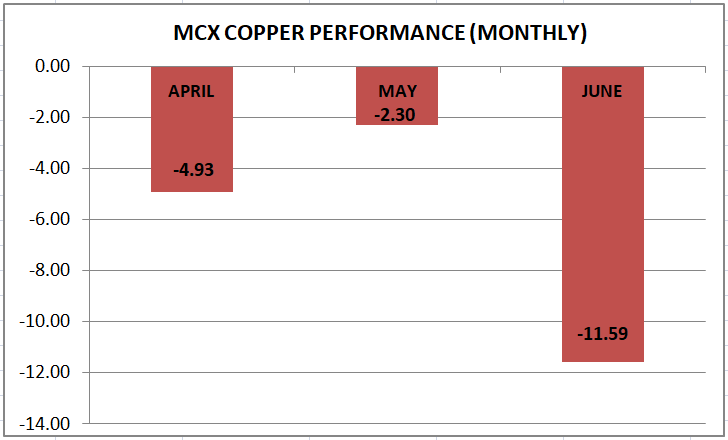 Hence, traders are advised to trade cautiously with proper stop loss and look for sell on rise strategy for the coming week. On the downside, the MCX Copper has support at around 570/545 levels while on the upside, it has resistance at around 635/650 levels.