Nifty started the day with a gap up opening and surpassed its important hurdle of 17300. Then, the index continued its momentum throughout the session and ended tad below 17400 with gains of one and a half percent. 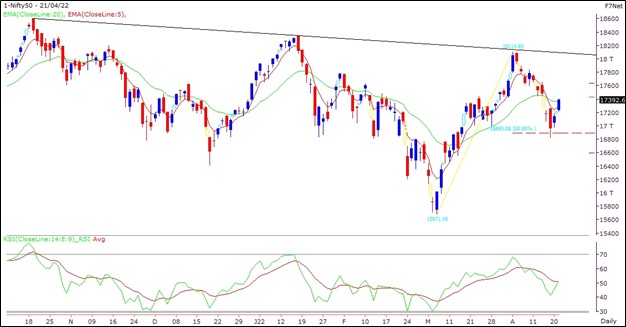 The index had formed an ‘Inside Bar’ reversal pattern yesterday and a move above 17275 gave a confirmation of trend reversal. Thus the Nifty resumed its uptrend post completion of a corrective phase and the broader markets too participated in the up move throughout the session.

Along with the price up move, certain oscillators are also indicating a positive momentum and hence we expect a continuation of the trend in the short term. All the sectoral indices (except media) ended in the green and most of them witnessed gains of 1-2 percent. With the price up move in last couple of sessions, the support base for Nifty has moved higher and 17270 will now be seen as immediate support. Traders  should look for buying opportunities in intraday declines and trade with a positive bias. On the higher side, the potential near term targets are seen around 17470 and 17620.

The market breadth was positive indicating buying interest in the broader markets as well. The Nifty Auto index has given a breakout from swing high resistance and has resumed the ‘Higher Top Higher Bottom’ structure. Traders can focus on stock from this sector which could deliver good returns in the near term.