Today, we have picked two stocks with a consolidation breakout set up as per technical analysis The Metal space has recently seen a relative outperformance during the market correction and the Nifty Metal index has resumed its broader uptrend from its ‘200 DEMA’. Within this sector, JSW Steel has recovered smartly from its recent swing lows and has now given a breakout from a falling trendline resistance. The volumes on breakout are better than its average and the RSI oscillator is hinting at a positive momentum. Hence, we expect a continuation of the uptrend in the short term. 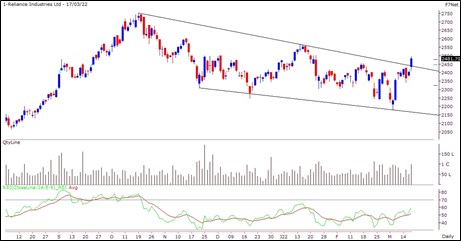 Since mid-October 2021, the stock has seen a price-wise as well as time-wise correction from its highs. In last one week, the stock has given a pullback from its support and had given a breakout above its hurdle in Thursday’s session. The Channel breakout indicates a probability of a resumption of the broader uptrend and hence, we expect the stock to rally higher in the near term. The RSI oscillator is also indicating a positive momentum.

Traders can look to trade with a positive bias and buy the stock in the range of Rs.2460-2450 for potential target of Rs.2600 in the near term. One should place a stop loss below Rs.2380 on long positions.